The Yukon Invasive Species Council announces that it is postponing the Invasive Species Forum which was planned for April 8th in Whitehorse, Yukon because of concerns about the novel coronavirus, COVID 19.  This all-day event was to feature local and guest speakers presenting on research and management of invasive species in a changing climate.

Marc Boulerice, President of the Yukon Invasive Species Council, says, “In light of the COVID 19 pandemic, we are aware of the importance of doing our part to prevent the spread of the virus and keeping Yukoners healthy.  It is indeed ironic that we are postponing a conference on invasive species because of the risks of a new invasive pathogen.”

Guest speaker, Dr. Anthony Ricciardi, who was to attend from McGill University, Montreal, says, “COVID 19 reminds us that no part of the world is invulnerable to human-assisted invasions.  It is arguably the most invasive organism on the planet at the moment.”

The Yukon Invasive Species Forum including the evening public lecture sponsored by the Yukon Science Institute will be postponed until late October.

Invasive Species in a Changing World

In cooperation with the Yukon Science Institute

In 2016 YISC was able to complete the second Yukon wide roadside survey looking at the spread of selected invasive species.

Do you know what's growing on your land?
Yukon Invasive Species Council (YISC) offers the Walk your Field program to all producers, rural property owners, hobby farmers and land developers throughout the Yukon. You will receive professional support in identification of weedy plants on your property. Early detection and rapid response are important in minimizing weeds and invasive plants.

Together with the horticulture industry YISC promotes the use of non-invasive plants to replace 10 of our most un-wanted horticulture plants. Look for the labels Good to grow on selected plants at your local supplier. These labels identify varieties that have been recognized as non-invasive by botanists and horticulturists. You can plant them in your garden in good conscience. Click here for more information on our horticulture section or pdf download the mini-brochure (1.48 MB) , a guide to make the right choice for your gardening projects.

Yukon Invasive Species Council secured funding money to develop a spotter’s network. Spotting and reporting of invasive species are essential elements of the Early Detection and Rapid Response (EDRR) system. A spotter’s network will act as “Eyes Across Yukon”, as a territory-wide program to encourage stewardship, to expand our knowledge, and to increase awareness and understanding of invasive species.
In June and July, YISC is planning to deliver pilot workshops to train interested citizens and professionals in plant identification to act as spotters. If you are interested in participating in this exciting program, click here

Invasive plants – Not in my garden!

In July the Yukon Conservation Society set a good example in removing invasive plants from their yard. The Yukon Invasive Species Council partnered with YCS in this hands-on project. Of high concern are oxeye-daisy and common toadflax, both species have been removed. Invasive plants reduce biodiversity and can have severe impact on the value of farm lands. The Society plans to replant their yard with native species.

Building on the successes of a symposium held in 2008, the Yukon Invasive Species Council hosted a second workshop. The goal of the 2012 workshop was to inform, network and engage in meaningful discussions about issues, challenges and trends of invasive species in Yukon. Speakers and participants of this one-day workshop discussed invasive species management in Yukon, Alaska and British Columbia.

During our last monthly meeting we had the opportiunity to learn more about invasive and potentially invasive plants in the Haines Junction area.
For our field trip the weather was in our favour, we had blue sky and no snow on the ground yet! It was easy to pick out the invasive plants along the Haines Road even without getting out of the car. It was striking: This time of the year the only plants still green along the roads are the introduced ones! Therefore they are easily being picked out among the native plants which are brown and dried up by now. We stopped at several locations along the road where Lloyd showed us some of the invasive species he is monitoring and managing since he lives in Haines Junction.

A survey was conducted to learn about areas and activities members of the Yukon Invasive Species Council (YISC) are interested in and what members’ priorities are for the future.
23 out of the 70 members took part in the survey. Following is a summary of the findings:

The majority of our members like to receive information by email but stated they would also like to participate in meetings with specific topics. Asked for their opinion on effective and important ways of distribution of information, our members top-rated a website, newspaper articles, YISC newsletter and public talks.

Top-rated actions our members would like to see in the near future are: work with decision makers towards a culture of concern and action, develop best management recommendations for specific groups and activities and increase media presence on invasive species issues.

Thanks to all members who participated in the survey. The results will flow into the actions identified in the Invasive Alien Species Partnership Program (IASPP) proposal, the workshop in February and in the update of the strategic plan for the council. if you are interested in the detailed results of the survey, please contact This email address is being protected from spambots. You need JavaScript enabled to view it.

Last summer the Yukon Invasive Species Council organized a series of weed-pulls at these locations:

On June 12th volunteers helped Bruce Bennett (of the Yukon Invasive Species Council) pull White Sweetclover behind the Yukon College and along the road to the beaver pond.

On August 3rd a group of volunteers met to pull invasives along the Annie Lake Road.

On August 11 a few residents of the Mary Lake subdivison were activ in their neighbourhood.

“Sweetclover likes to invade disturbed sites and gravel bars. When it expands its range onto the pristine gravel bars along a river, it becomes a problem for shorebirds like the Spotted Sandpiper which nest on the gravel”, Bennett explains. 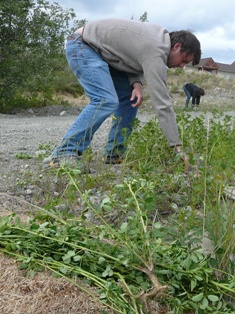 This is one of the impacts invaders poses to our environment. Some of the clover plants pulled by the volunteers had already reached a height of 2 feet. “It is really satisfying to get these fat ones”, expressed Maciej Stetkiewicz, participating in the first weed-pull. This time of the year the clover is not in seed yet and can be left on the ground to rot after pulling.

big, scary Alien on the move

May 14, 2010 - With the approach of International Day for Biological Diversity on May 22nd, the time is right to start focusing on the early detection of invasive alien species—the second biggest threat to biodiversity worldwide. In a press release The National Invasive Species Working Group promotes early detection of invasive species. Giant Hogweed is not jet reported in the Yukon and might be confused with cow-parsnip which as an example grows along the South Klondike Highway in the region of Tutshi Lake. Read the article and learn how to recognize giant hogweed.
pdf Read more... (228 KB)

Environment Fair 2010 was a success

The Environment Fair on April 17, 2010 was a great success. Table and display about invasive plants and the Yukon Invasive Species Council were visited well. Thank you to our volunteers Lloyd Freese, Randy Lewis, Matt Ball, Jim Dillabough, Heather Clarke and Andrea Altherr who helped during preparation and at the fair. A special thanks to Bruce Bennett and Carrie McClelland who contributed to our display and provided great support during the fair.

More than 500 visitors came to the fair. Some of them stopped at our table and expressed their concern about sweetclover they see growing along the highway and their driveways.

Matt Ball’s talk on “Plants that don’t belong” was well received. He used the example of leafy spurge to tell the story of how invasive plants come to the Yukon, why early detection is important and explained ways of eradication.