Bird Vetch under the spotlight!

Update 2021:  For the fourth year YISC worked at th project site. During several visits flowering plants were removed and spot applications of chemicals (home owner grade Roundup) were administered. Unfortunately we had to notice that the chemicals weakened the plants but in no means eradicated them. Some parts of the project area shows regrowth of native vegetation. Staff from Associated Environmental Whitehorse helped gattering native seed which will be spread on unvegetated parts of the project site. We also noted a few patches of bird vetch in the adjacent natural area. This shows how aggressive bird vetch is spreading and it's ability to invade natrual areas is of especial concern. YISC decided that this battle has become too big for a non-profit organizations and will approach the landowner to help taking action.

Update 2020: Last year at the project site, we saw some bird vetch re-growth. However, we found that the plants that are coming back are weaker this year! For 2020, we focussed on monitoring new plant growth, and conducted a public weed pull to remove bird vetch plants from the site. Despite the volatile weather of the 2020 summer season, several YISC board members spent hours at the site conducting multiple sessions of pulls, mowing, and spot chemical treatments. As prescribed by manufacturer, we found that these chemical treatments were most successful when applied to very young plants.

This eradication project involves making sure that native plant species can establish themselves in the disturbed soils to give them a chance to compete with bird vetch. In 2019, YISC conducted a reseeding project to collect and spread native seeds with the help of Stantec staff. Last year we could see the success of this reseeding, as native plants were popping up in the disturbed soil at the site. In 2020, Core Geosciences Inc. staff helped us to collect and spread seeds once again. We will be keeping our eyes out for these new plants at Range Point this year! Thank-you to everyone who has helped with this project so far, we are seeing that our efforts make a difference!

Update 2019: It wasn’t really a surprise to see quite a bit of bird vetch re-growth in the project area. The obvious course of action was to try a different approach. We selected a few areas for a trial with chemical applications. During several sessions the low-grade round-up purchased at Canadian Tire was applied. As a result, plants started to shrivel and die off. Some hardy plants needed to be treated several times.

In addition, we had 4 weed-pulls organized to remove the abundant growing white sweet clover. More grubbing was spread over one area and this was followed up by spreading of native seed. Again, we kept an eye on the surroundings and removed all bird vetch to prevent seed production.

Thanks to the staff of Stantec for coming out to collect seed and spreading them.

A big thank you also goes to the board of directors of YISC for all their volunteer time invested in this project and to Environment and Climate Change Canada’s Environmental Damages Fund for their financial contribution.

In 2018, the Yukon Invasive Species Council (YISC) has made Bird Vetch its priority. The largest weed pull project took place at Range Point. Located close to downtown Whitehorse, this trail is a popular recreation area and is crossed by the Yukon River and McIntyre Creek which are salmon bearing waters. Thus, Range Point is of great ecological and social value and it is important to maintain its ecosystem healthy.

Bird Vetch is a perennial plant with numerous soft stems and compound leaves with tendrils. The tendrils allow this plant to attach to any support including herbaceous vegetation which can get suffocated by Bird Vetch. Because this species spreads very efficiently via seeds and by underground horizontal rootstocks, infestations grow rapidly.

Once it is established, Bird Vetch is difficult to eradicate. The restoration of the natural biodiversity requires an effort that spans over several years. Hand-pulling can be effective for small infestations, but the area needs to be monitored closely and treated for multiples years. For larger infestation, mowing and herbicide application can be effective.

In 2017, during the initial year of the Range Point project, YISC mapped invasive plants, removed and disposed of a layer of topsoil and invasive plants, pulled invasive plants and collected native seeds of species such as yarrow, locoweed and fireweed. In 2018, YISC, along with numerous volunteers, led three Bird Vetch weed pulls at Range Point. During the last pull, YISC conducted an experiment; volunteers pulled one half of the area, on the other half of the site, test plots were delineated, and a concentrated vinegar solution was applied to each Bird Vetch plant with the goal of weakening the roots.  Over a third area, topsoil was spread to deeply cover any root fragments possibly present in the soil and the native seeds that were previously collected were scattered. This experiment will allow YISC to determine which methods are most effective in controlling the proliferation of Bird Vetch.

The fast-approaching spring will reveal the degree to which our efforts have been successful. Range Point is YISC’s first major eradication project and is a success thanks to the collaboration of the public, the City of Whitehorse, Ta’an Kwäch’an Council and to the Environmental Damages Fund as our funder. YISC hopes that native vegetation will soon take over Range Point! Stay tuned for updates about our Range Point project. 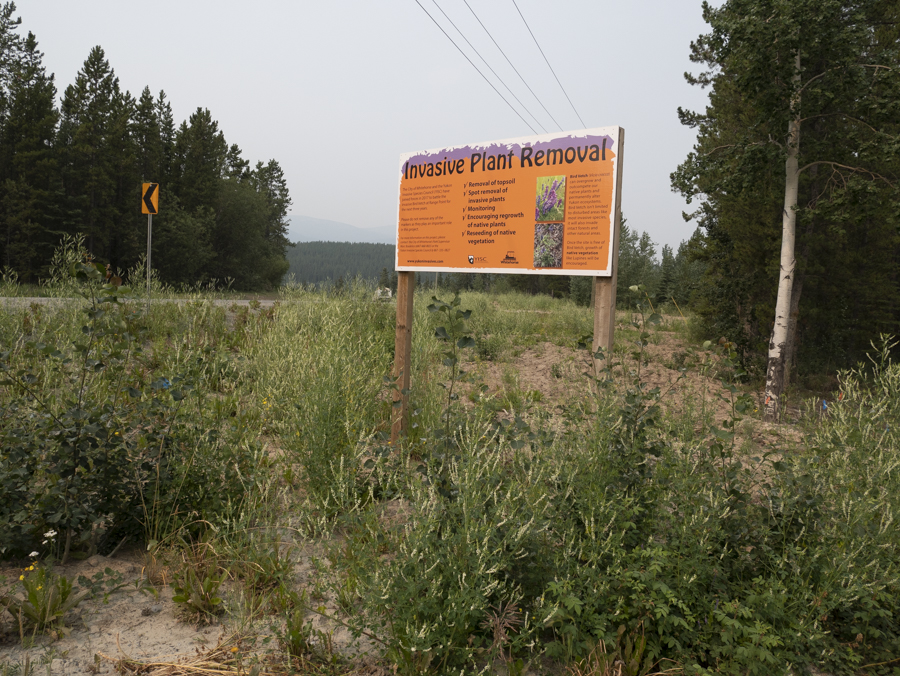 Invasvie Tufted Bird Vetch spread over a large area. In 2017 soil and vegetation was removed.  Since  then invasive plants removal is a top priority at the project site. 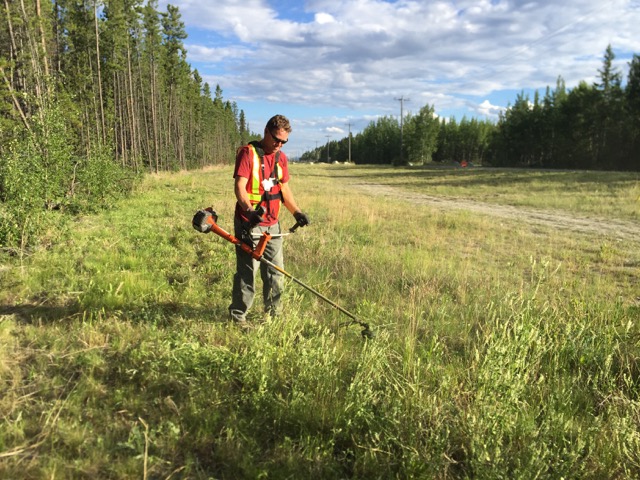 Follow-up management at the site include: mowing and brushing, hand removal of re-emerging tufted bird vetch and spot application of Round Up.