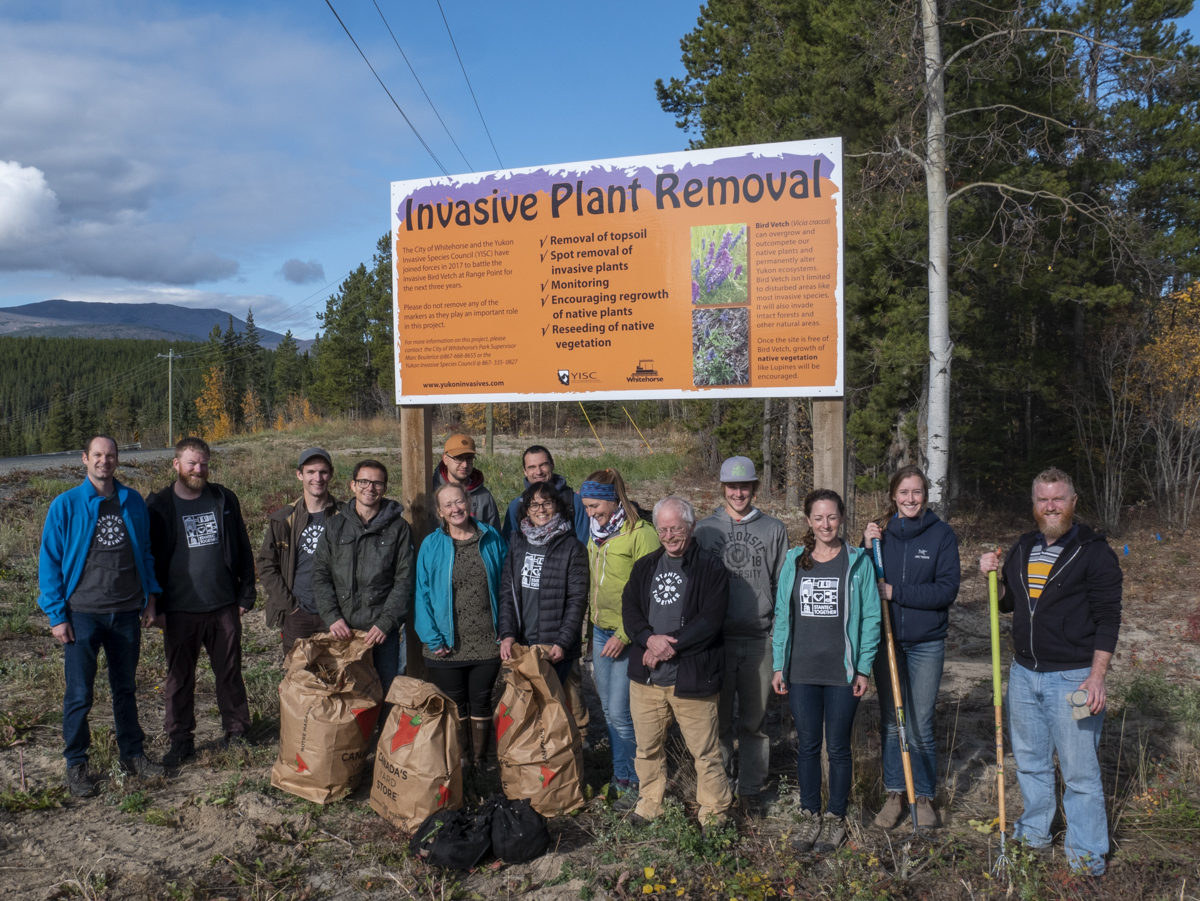 Register for the remaining webinars here!

Ryan Lapointe : A tropical problem in a Boreal Paradise

This topic was brought to us by concerned citizens who had noticed some goldfish and some “interesting” looking shrimps in the Atlin Warm Springs. We thought that it would be good to look at this aquatic environment to learn more about the situation and to see if there are lessons that could be learned to prevent and manage other similar infestations.

Hi everyone, my name is Sruthee Govindaraj. I’m a biologist at Core Geoscience Services in Whitehorse. My background is in environmental contaminants and human health. Currently I am a Masters student at Simon Fraser University. Invasive species are a matter of concern for us in the Yukon with climate change. As we know Yukon is facing climate change at double the rate as the rest of the world. The climactic zones and eco regions are moving upwards as the north becomes warmer causing species to move upwards. Government of Yukon doesn’t have any directive to tackle this matter in a proactive manner. Recently, I was one of the co-chairs for the first Yukon Youth Panel on Climate Change. We provided 27 recommendations to the Government of Yukon based on gap analysis and research we conducted. Our recommendations focused on various topics including invasive species. During this talk, I will be focusing on the effect of climate change and invasive species on the Yukon from a youth perspective.

David Krug: Native Plant Use in Reclamation and Restoration

A characteristic trait of the most aggressive and damaging invasive plants species is their ability to quickly colonize open space following land disturbance. This presents a special challenge for land reclamation following a disturbance event. Revegetation using native plants is an effective and necessary method for combating the ingress of invasive species on disturbed lands. For effective use, native plant material must be sourced from appropriate provenances and appropriate methodologies be developed to collect, store, and preserve the viability of seeds. Efforts should be made during reclamation planning to ensure implementation of revegetation using native plants, with special consideration for the potential impacts of non-native and invasive plant species on the reclamation efforts. Climate change and anthropogenic land disturbance events are increasing in frequency and severity, both of which have increased the spread of invasive species. As a result, best practices around the use of native plants in reclamation and restoration are needed more than ever.

Title: Global, Canada, and Yukon Perspectives on the Ecology and Management of Invasive Wild Pigs

Speaker:Dr. Katie Spellman is an Assistant Research Professor in plant ecology and education at the University of Alaska Fairbanks International Arctic Research Center.

Title: Tracking an Invasive: A Snapshot into Yukon’s Exotic Species AND
Earthworm Invasions in the North

Title: Global, Canada, and Yukon Perspectives on the Ecology and Management of Invasive Wild Pigs

Abstract: European Wild boar and their hybrids with domestic pigs, collectively called ‘wild pigs’, are not native to North America but have been introduced to Canada and the U.S. on multiple occasions. They were first introduced to Canada in most provinces and the Yukon, beginning in the 1980s to be farmed for meat and establish shoot farms. Widespread past and on-going releases and escapes created many populations of free-ranging wild pigs across Canada. There have been two documented cases of escapes in the Yukon, but the territory remains wild pig free so far. Wild pigs have been detected in all provinces, but with only one confirmed in Atlantic Canada, with the large majority currently in the Prairie Provinces of Alberta, Saskatchewan, and Manitoba. They feed on almost anything, including agricultural crops, mammals, reptiles, amphibians, and cause intensive environmental damage. Perhaps most importantly, wild pigs may be important reservoirs for diseases that can be transmitted to livestock, pets, wildlife, and humans. Our research has documented the spread of wild pigs across Canada at a rate of over 80,000 km2 per year. This is facilitated by Canadian wild pigs having by far the largest home ranges recorded on earth, high reproductive rates (6 young per litter, continuous reproduction year-round, multiple litters per year), and widespread areas of high quality habitat comprised of a mixture of tree cover, wetlands, and agricultural cropland.

Speaker:Dr. Katie Spellman is an Assistant Research Professor in plant ecology and education at the University of Alaska Fairbanks International Arctic Research Center.

The boreal forest remains one of the few ecosystems on earth where invasive plants have
had relatively little impact. As climate changes, boreal forests face the simultaneous threats of increasing invasive plant abundances and increasing area burned by wildfire. Highly flammable and widespread black spruce forest represents a boreal habitat that may be increasingly susceptible to non-native plant invasion. This talk will discuss 1) the recent research on non-native plant invasions and wildfire in the boreal forests of Alaska, 2) how the introduction patterns and site susceptibility differs from other ecosystems, and 3) opportunities and challenges to reducing the spread into burn areas.

Title: Tracking an Invasive: A Snapshot into Yukon’s Exotic Species AND
Earthworm Invasions in the North

Abstract: The Yukon Conservation Data Centre maintains lists of species  known to be exotic in Yukon. These species are primarily plants, however we are increasingly discovering exotic invertebrates (insects, worms, slugs). This presentation will look at what species are found, which are new, and what we can be looking for.

In most of Canada and the northern United States, earthworms were extirpated during the last glaciation. However, non-native earthworms were introduced with the arrival of European settlers and have since being spread across Canada. This has led to substantial impacts on plants, birds, invertebrates, and ecosystem functioning in invaded areas. Yet, little is known about the spread and effects of invasive earthworms in northern Canada. In this presentation, I will discuss my research on earthworm invasions in the boreal forest of northern Alberta, and how it may apply to the Yukon, where we have recently started to investigate these invasions as well.

Brandice Hollier’s presentation will provide an overview of Riding Mountain National Park’s AIS Prevention program. The program began in 2015 and has evolved and grown over time. The program includes an inspection and decontamination program as well as education and monitoring programs. The presentation will discuss these programs and the efforts that have gone into preventing the spread of zebra mussels (Dreissena polymorpha) to waterbodies within the Riding Mountain National Park.

Bio: Brandice Hollier has been with the aquatics program in Riding Mountain National Park (RMNP) for four years, and with the AIS program for two years as a Supervisor and as the Project Coordinator.

Thank you for your support!

We couldn’t do it without the support from volunteers and our funding partners. In addition to our project funding, in 2019 we received a donation of $2000 from Goldcorp which we used to host several spotter’s network workshops. The great staff of Stantec volunteered their time to collect native seed which they spread afterwards at our project site at Range Point.

We had close to 100 volunteers involved in weed-pulling events. More than 200 hours were spent pulling weeds. YISC removed 3 truck loads and 59 garbage bags filled with mostly sweet-clover. Thanks to the crew of the City of Whitehorse for picking up those piles!

Conserving the Integrity of the Alsek Watershed’s Fresh Water

The Yukon Invasive Species Council is pleased to announce that the three-year project “Conserving the Integrity of the Alsek Watershed’s Fresh Water” has been founded under the ECOAction Community Funding Program. Environment and Climate Change Canada’s EcoAction Community Funding Program provides financial support to community groups for projects with an action focus to improve the environment and increase environmental awareness and capacity in the community.

This project addresses conserving the integrity of a Canadian Heritage River, the Alsek, and its tributaries. This will be accomplished by preventing the introduction of aquatic and riparian invasive species. Project activities include risk assessment, weed management, survey and public awareness building.

More specifically, high-risk access points (roadway-freshwater intersections) for Dreissena spp. (zebra and quagga mussels) and Melilotus alba (Sweetclover) into the Alsek Watershed will be identify. In addition, high use water-based recreation areas within the watershed will be identified and together with appropriate land managers (Parks Canada, Champagne and Aishihik First Nation, Village of Haines Junction, etc.) YISC will establish educational signage. YISC will also examine the extent and scope of the dumping of bilge water and fish containers from boats returning from outside of the Alsek watershed (including Haines, Alaska) into lakes around Haines Junction (Dezadeash, Kathleen and Pine).

Mowing and hand removal of sweetclover and other invasive plants will be organized and supported in cooperation with the community.

YISC also will create and deliver elementary school and youth activities on aquatic and riparian invasive species for Haines Junction and surrounding communities. Specific educational activities aim to keep Yukon’s waterways free of invasive species and include these messages:

Public awareness building is expected to take place through the whole project but strengthened in a one-day community workshop in Haines Junction on invasive species threats to the Alsek watershed. This community-specific outreach will encourage knowledge transfer in the conservation of the Alsek Watershed’s fresh water. This will facilitate behavioral changes in residents to reduce the risk of invasive species introductions and promote increased communication between YISC, local organizations and community members. The development of future water conservation partnerships is also an anticipated outcome of the workshop.

Project activities for November 2019 to March 2020 include start up meetings with stakeholders, conducting the risk assessment, bringing our education program to the school and plan for outreach and management activities for next summer.

Currently we are seeking a community liaison to implement the school program and deliver outreach events.

Contact: This email address is being protected from spambots. You need JavaScript enabled to view it.